Karly Salinas is on the phone gossiping with a friend, when her roommate Nyxon walks into the room demanding to talk to her. Karly hangs up the phone Nyxon tells her that Karly’s big mouth got her into trouble at work. Karly doesn’t know what Nyxon is talking about, and Nyxon goes on to tell her that since Karly started spreading rumors around the office that Nyxon liked to take a “liquid lunch”, she’s been written up. Karly keeps protesting as Nyxon grabs her ties her wrists behind her back. She shoves a white ballgag into Karly’s mouth pulls the strap nice tight. Next, she ties a tight chest harness on Karly then a nice tight crotch rope. She pulls Karly’s legs up onto the couch ties them into a frogtie, then leaves her there to struggle. 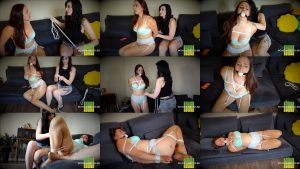