Robin the Girl Wonder (Jeanette Cerceau) has been very distracted as of late. Seems she is obsessed with flirting with Aquaman, and can’t keep her hands and eyes off her phone. This irritates Batman, who wants Jeanette to search an old warehouse for clues to the whereabouts of the notorious Dr. Livingstone, who has been snatching young girls off the streets and turning them into petrified living statues!

Robin fails to heed Batman’s warnings and lets her guard down to flirt more via text with Aquaman when she is captured by the evil Doctor, who clamps an iron-like hand over her mouth to keep her silent! It seems the not-so-good doctor has spoofed Aquaman’s phone and used it to lure the helpless sidekick into a trap! After being sent to slumbertown by means of a rag soaked in the Doctor’s special solution, she awakes to find herself bound and gagged in the Doctor’s playroom, ready to join his stable of living love dolls!

Unless she can reach the timer and shut off the device, she’ll become a living statue herself! She fights like mad as the countdown continues, each second bringing her closer to her doom as she stretches her feet in a vain effort to stop the countdown. She even kicks off her shoes and stretches her pantyhose clad feet for all she’s worth, but the device is maddeningly just out of reach! 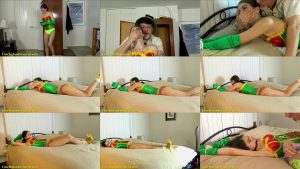