Rich brat Jasper Reed is sitting on her couch, when suddenly Nyxon comes out of nowhere and places her hand over her mouth. Jasper squeals and struggles, trying to get away, but Nyxon overpowers her and she goes limp. When Jasper opens her eyes, she finds that the upper half of her body has been taped tightly with duct tape. She begs to be let go, but Nyxon just laughs in her face.

She tells Jasper that she really should be more careful and make sure that her door is locked. Nyxon had noticed all of the expensive electronics that Jasper had while she was moving in, and waited for the right time to make her move.

She removes Jasper’s purple satin panties and shoves them into her large mouth. Them she wraps duct tape around her head to make sure that she doesn’t spit them out. Nyxon grabs Jasper’s legs and secures them with tape, then leaves her to struggle while she burglarizes her house. 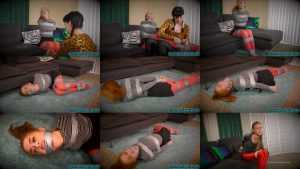