David and Arielle are meeting up to discuss some things. Unbeknownst to her those things are related to some bondage fantasies he’s going to live out via some incriminating photos he’s had taken of her while she was up to no good.

He hands her a collar and then forces her to stand and strip out of her disco skirt and blouse. Her arms are then bound and she’s placed in a head harness panel gag before forcing her to move around and show off her lingerie clad form for him in thoroughly humiliating fashion. Another harness rope is added and her breasts exposed before David binds her ankles together. He gropes her and pulls her around on a final rope as a leash adding to the humiliation. Finally he adds a blindfold and is off to eat a bite and plan out the next stage in Arielle’s subjugation. 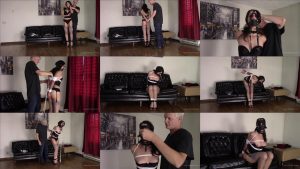