Chrissy has been tied to a chair in her skimpy yellow bikini with her legs spread and her arms tied down to the sides. She struggles against the ropes but has no chance of escape. She is completely helpless and her ‘captor’ uses this to his advantage.

Chrissy tries to resist at first but she secretly loves all of it. He puts his hand over her mouth and pinches her nose a few times to intensify the breath play. All of the conflicting feelings and sensation overtake her and t’s not long before she explodes in an intense orgasm… exactly as he intended. Now what does he plan to do with his helplessly bound captive next? 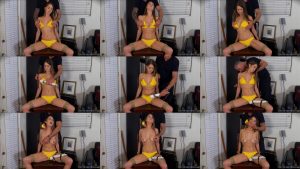