Sahrye is missing and the whole neighborhood is out looking for her. But her neighbor finds her hiding in his basement and Sahrye tells him that she is not missing. When she tells him that she is running away and plans to hitch hike across the country, he tells her of all the dangers a young girl her will face. She does not believe him and tells him that she cannot be talked out of leaving. They argue the situation over for some time and at one point, the man gets Sahrye to agree to a deal. A deal where if the man can prove to her just how dangerous things can get, she will return home. But if he cannot prove his point, he has to drive her to a bus station and pay for her ticket. To prove this point, the man grabs Sahrye and using plastic zip tie, he binds her hands behind her back. With Sahrye starting to complain, he wraps her upper body with longer zip ties. Then he emphasizes that if a person were to tie her like this, she might not get a chance to scream for help. To demonstrate this, he stuffs her mouth with panties and then tapes her mouth up to gag her. After he wraps zip ties around her legs, he lays Sahrye down on the floor, turns off the lights and leaves her struggling bound and gagged in the dark. The zip ties are wraps so tight that any movement is very painful for Sahrye. “How did I let him talking me into this!” she thinks to herself. But she also realizes that she is completely helpless and if the man wanted to, he could easily pull her panties down and fuck her. Thinking this, she agrees that her neighbor has proven his point and she will agree to go home. But now she needs to get him untie her and with her mouth packed and wraps so tight, there is not way she can say anything. Then the man returns and instead of letting her go, he pulls her top and pants down. Then after using more zip ties to hogtie her, he pulls Sahrye’s bra down too. Sahrye is nearly in tears because of the pain. She tries to tell him that she sees his point. But the deal was for her to stay like this all night long and it is still very early. 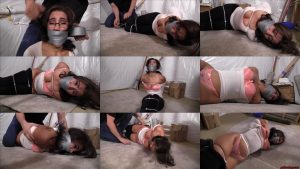