His step-brother’s wife Sara (Cheeky Little Toy) likes to cheat with younger men. And when her husband is away, it is always time to play. The video begins with him walking into a hotel room as he talks to his step-brother on his cell phone.

After chasing to man away, he decided to make sure Sara was a good girl for the rest of the time her husband was away. He did this by tying her up, gagging her and stashing her in the hotel room bathroom. Sara grunts and whimpers at him through the gags as she struggles seating on the toilet seat. What makes things even worse is, her step-brother in law has her tied up in the sexy garters and nylons she was wearing for her date with the younger guy.

At one point, the gag is removed from Sara’s mouth and she demands to be untied. Sara tells him that if he lets her go, she will be a good girl. He knows that she is lying and that him having her tied up is actually getting even more turned on. But he has things to do. So, he restuffs her mouth with panties and cleave gags her again… 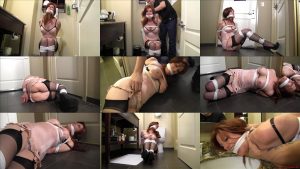