Sahrye has not been a very good girl lately and today she is in trouble again. But step-mom is not home to punish her. If she was, the punishment would be severe. So Sahrye begs her step dad to be the one to punish her. “What am I going to do, Spank you!” he says. She tells him that anything he does will be better than if her step-mother punishes her when she gets home in a few days. She somehow talks him into doing things her way. But this doesn’t turn out so good for Sahrye and things do not go as she expected when he takes her down in the basement. Instead of spanking her, the step father uses leather straps to restrain Sahrye. Then to shut her up, he shoves a big white rubber ball in her mouth. Sahrye tries to protest as her step dad strips her down to her girdle. But all that this accomplishes is to make Sahrye starts drooling all over the place. After he has Sahrye all strapped up, he forces her to her feet and makes her hop over to spot in the basement where he can attach her to a rope hanging from an over head beam. With Sahrye still drooling uncontrollably, her step dad removes the ball gag. But before she can say very much, he replaces it with a inflatable penis gag. He pumps it up until Sahrye’s mouth is packed to its limit. Now as she hops around on the floor, she hardly can make a sound. Then after a short while, the problem with drooling return. At about this time Sahrye realizes that maybe she should have waited for her step-mother to come home for her punishment. 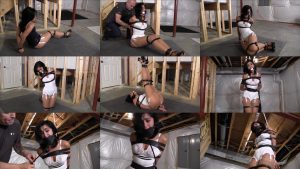