The video begins with Sahrye walking into the break room. Liz walks up behind her and grabs her by the hair. The fight is on and the girls roll around the floor throwing each other around. At one point, Sahrye gets Liz in a hold that she cannot get out of. She over powers Liz and when Liz cannot do anything about it, she ties her up with rope.

When Liz figures out what is happening, it is too late to fight, she now trussed up tight and there is no way she is getting loose without help. Then Sahrye returns with 2 pair of panties. With Liz trying to protest, she stuffs her mouth with both pair of panties and then tapes her up to gag her. Now there is no way for Liz to make a sound. Not with her mouth packed and wrapped tight. All she can do is grunt and “mmmph” as she struggles bound and gagged.

Finally before Sahrye leaves her, she hogties her. Sometime later, Steve the boss comes into the break room to find Liz still rolling around on the floor all tied up and gagged. After he figures out that they have not been robbed, he sits down to enjoy the view of Liz squirming and moaning on the floor. After a short while he starts unwrapping Liz’s face and pulling the panties out of her mouth so he can hear her explain how Sahrye tied her up for no reason. 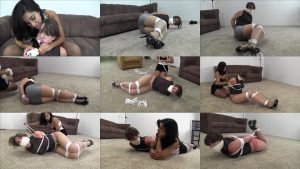