Super Mario ( Terra Mizu ) searches the yard for Princess. Mario thinks she’s being stealth in her search but I sneak up behind her bopping her on the head with my magic tire iron.

I press it up against Mario’s pussy and watch her scream from the intense sensations grinding into her pussy. Mario bucks and struggles losing her cap but I am relentless and don’t stop the torment until I tire of holding the giant hitachi.

I stuff Mario’s big mouth with a ballgag strapped in nice and tightly then taunt her by placing her cap on my head. I laugh as I jack the speed up to super high for Super Mario. 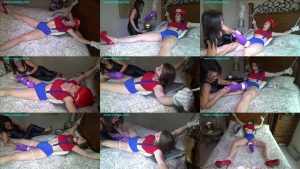