He was on his phone looking out his patio door when he saw something going on in the apartment across from his. He saw a man attacking a woman. The man wrestled the woman down and tied her up, He saw the man then gag the woman and this is when he decided to intervene.

He ran to the woman’s apartment and forced the door open. He found Nyxon struggling bound and gagged. Thinking he was rescuing her, the man removed the gag. But instead of thinking him, Nyxon was angry. “What do you think you are doing?” she demanded to know. When he told her that he was trying to help her, she told him that she didn’t anyone’s help. She told him that she paid a man to tie her up like this, because she liked being tied up.

The man was now kind of irritated with Nyxon because of her attitude and started to look her over. He explained to her that the man that tied her up, really didn’t do too well of a job. She he grabbed some rope and decided to show Nyxon what being tied up good looked like. Nyxon tried to protest, but soon, found herself tied helpless. Then the man stuffed and taped a gag in her mouth. ‘NOW THERE! That is what being tied really looks like!” the man told Nyxon.

Then the man pulled Nyxon’s big tits out and her panties down. He hogtied her with a piece of rope tied up up between her legs. Nyxon pretended to be angry. But that was only part of the game for her. Because she had never been tied so helpless and humiliated. And, the only thing that make this all better, would be if the man took advantage and had his way with her. 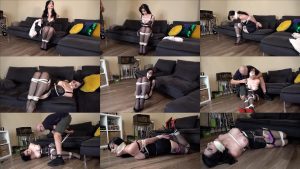