Nyxon runs a successful bondage website, and her roommate Lilac is constantly begging her to shoot a video with her. Nyxon always blows Lilac off for one reason or another, but this time she has a change of heart. She grabs some wardrobe from her studio, and tells Lilac to change. When the next scene opens, we find Lilac dressed in a hot pink bodysuit, black disco pants and pantyhose.

She’s wearing a harness ballgag and is tightly tied with rope. Nyxon instructs her to struggle while she runs the camera, and Lilac moans in distress from behind the gag. Nyxon laughs and tells Lilac that she’s the one who asked for it, then walks away to let Lilac struggle.

After some time, Nyxon decides to amp things up a bit, and pulls Lilac into a severely arched hogtie. Lilac screams through her gag, and Nyxon looks at Lilac’s huge size 10 feet and has another idea. She cuts the toes off of her pantyhose and ties her toes to the D-ring on top of the head harness. This adds to Lilac’s stress and she consistently moans though her gag. Nyxon lets her struggle some more, then calls it quits… 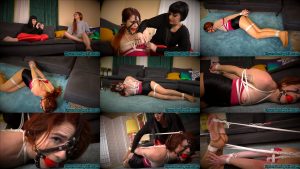