I dunno man, I think this ArielAnderssen is getting a bit big for her boots. TemptressKate is a top domme, and ArielAnderssen just doesn’t seem to be responding properly. I mean she’s been loaned out to the game – that stuff with ToyChloe- it was pretty hot but it just wasn’t strict enough to break her. She says it herself she came on GameOfSlaves to get the real thing. But dissing the game organisers is a bit of a high-risk strategy and pissing off her camera crew too is just being a bit of a bitch.

This is really promising though she’s issuing an open challenge to dommes to come and do better than she can do herself with self bondage! She really needs to be taken in hand… why isn’t TemptressKate keeping her on a much tighter leash, anyway? It’s like half the time she’s even a free agent at the moment. Man though she does look bloody hot in a tight hogtie. And those feet and legs that go on for miles… come on, someone show her exactly what her real place is! 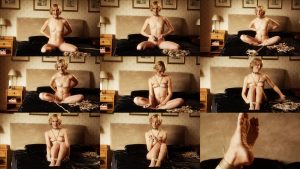