A movie especially for the latex enthusiast. Anita De Bauch enters carrying an ice release wrapped in bubble wrap to keep it cold.She decided to proce to dress in a skin tight black latex catsuit and matching long opera type latex gloves before spraying her body with the liquid serum to shine her latex making.

Next Anita removes the ice release from its wrappings and padlocks it to the floor.She ties a white knotted crotch rope around herself then ties the ends of a rope that passes through a pulley connected to an electric winch around each of her ankles.

The feel of the tight latex on her body is exquisite to Anita and all the movements exaggerate this, and with the crotch rope that is constantly under tension to provide her with extra stimulation in a certain woman’s special place encourages her not to stop her movements. But eventually stop she must and after releasing herself a few hours of girl time under the covers of her bed maybe on the menu.

After connecting the end of her crotch rope to a rope from a second electric winch Anita handcuffs one wrist to the floor and the other to the ice release then uses a remote control to operate one winch to bring her legs up and over her. 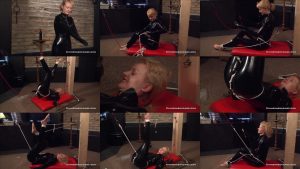