It might not be apparent upon first glance, however Elise is in quite the predicament. With her arms raised above her head, her wrists are tied through a hard point, down to her neck. As she relaxes her arms, the cord is pulled tightly on each side of her neck, causing her face to turn red, purple and blue. 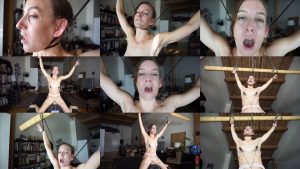