Sexy Brooke Thomsen had been wanting to try bondage for awhile now and was working up the courage to ask her boyfriend to try it. Today was the day. Dressed in a red hot disco jeans/leotard combo, she sits on his lap and tries to persuade him.

Before long she is tied up on the bed. He asks her if its tight enough and she says it’s perfect and asks for the ballgag. He straps it into her mouth and watches her struggle around. Watching her squirm and glide around in the ropes gives him an idea. He grabs some tape off of the dresser and tapes over the ballgag, pressing it deeper into her mouth. He adds some more ropes as well.

“Well now, lets see if you can get out of this. I’m gonna leave you here for a while by yourself to struggle.” “No please! Don’t leave me here!!” is what she was trying to say, but it became very lost in translation thanks to the intense gag in her mouth. He walks out to let her have her quality rope time. 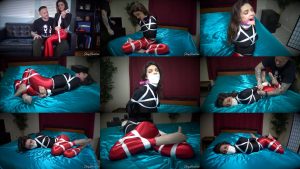