The entire neighborhood had rallied to join in the search for Candace, the cute little thing who had gone missing just two days ago. Everyone was devoting their all to finding the poor girl, including the man who took her! Of course, he was dedicated to leading the posse as far away from his prize as possible, giving phony and misleading clues over the phone to the organizer of the search party! Candace was terrifiied, desperately trying to alert the man on the other end of the call to her whereabouts, but with her captors hand firmly sealed over her mouth, her cries and screams were swallowed into nothingness. Tightly bound, the beautiful blond could not prevent her captor from strapping a big ball into her mouth and silencing her for good! Nothing could escape her mouth now, except for muffled cries and humiliating strings of drool! The man would soon be returning to lead the searchers even farther astray, and Candace was left to struggle for freedom, desperately searching for any slack in the ropes, any give in the knots, but her captor had done far too good a job. Still, she tried, only to be interrupted in her thrashings when the man returned! He tied her into a ball, pulling her dress up to expose her bare pussy, furthering her terror and humiliation! Now completely helpless, she could only twitch and sob into her gag as she waited for rescue, but as the tears filled her eyes, she realized her chances were dwindling with every minute! 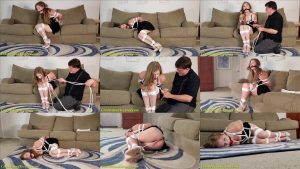