After she hit the silent alarm, he had no choice but to take Davina with him. When he got her to his motel room, she let him know that she didn’t plan to cooperate. So, to make it difficult for her to run away, he took her dress and left her in her full slip and underwear. But Davina told him that she no problem running away the way she was dressed. So, the man had no choice but to tie her up with rope. Then because she would not quit chattering with him, the man stuffed her mouth and tied a rag between her teeth to gag Davina. Now as she struggled bound and gagged, Davina wishes that she never antagonized the man. But she continued to chatter away, even though the gag. So, to muffle her more, he re-stuffed her mouth and this time taped her up tight. This seemed to take care of the problem. But to make sure she knew he was serious, the man pulled her boobs out of her bra. Then he hogtied and crotch roped her. 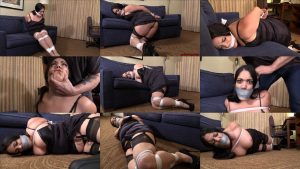