Nyxon has been hiking around all day, when she comes to some sort of strange industrial park. Parched, she opens a door and heads inside to look for some water. She spies a mini fridge, grabs a small bottle of water, and walks further into the building. A strange feeling comes over her, and she starts to notice some odd things. A strange pole with a metal ring, and a large board with a large ring nailed to the wall.

She keep going further back, and finds another room filled with lighting and other strange objects. A man walks up behind her, grabs her and pulls her down to the floor. He shoves a white ballgag into her mouth, and lifts up her t-shirt revealing her huge tits. 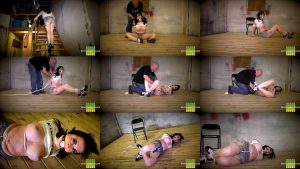