Cupcake is on the phone with a friend. When her friend suggests they get together, Cupcake tells her it would have to be some other day. She explains that she has a date with a man whom she has been chatting with on the internet. The friend on the phone wars Cupcake that it might be dangerous meeting a stranger. But, Cupcake tells her that she is not worried at all. “After all, what could possibly happen!” She tells the friend.

The scene then shifts to her bedroom and Cupcake has found out just how bad things could turn out as this man has her hogtied and gagged. Cupcake is furious as she struggle hard to get loose. At one point, she is able to get out of the hogtie. But her legs and ankles remain bound securely. Now, her skirt has risen up above her waist to show she is wearing a tight little panty girdle. In the end, the man will have Cupcakes tits out and by that time, she will have settled to down and be ready to let the man have his way with her, as she wanted in the first place. 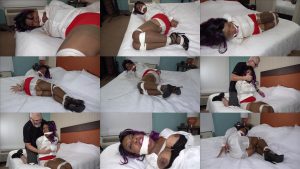