Dixie and I walked into this man’s bare workshop, unsure of what we were getting ourselves into. I was wearing a short white top that tied in the front, a jean pencil skirt and knee high stiletto boots. Dixie had on a cute red skirt that flared out, black top and high heels.

We introduced ourselves to the man and told him why we were there. He should have been expecting us, from the information I gathered from Mr. Little. I told him that we heard he was a little kinky and we brought some goodies for him to play with as long as he could give us the address and purchase history for Pedro. He opened the bag and saw a bunch of nylon rope and two ball gags.

The mustached man seemed very pleased. He gave us Pedro’s address without hesitation and I wondered why he knew it off the top of his head. Did he deliver the parts that were needed himself? Did Pedro assemble the arms in his home? This is something I would need to investigate later. The mustached man was eager to get started with the kinky part of the deal.

He asked Dixie if she knew how to tie and she said she had tied a few women up before. I gave her a baffled look and she told me not to judge her. Mustached man gave her directions on exactly how to tie me as I bugged him about the purchase history. He kept putting it off and I had been in this situation before with the strip club owner. I was starting to doubt that I would get what we came after. 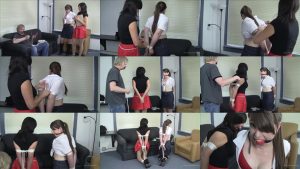