Sexy blonde Sasha is a bondage junkie. She craves to be tied up and made vulnerable for her top. Elise is in the mood to play, as well. After informing Sasha that she “doesn’t need to see… I do,” Elise pulls a soft, thin Christopher Fetish hood over Sasha’s pretty face, rendering her semi-anonymous. Using thick leather belts, Elise begins strapping Sasha to a vertical wooden beam with her arms over her head, exposing her sensitive arm pits to Elise. After Elise straps Sasha’s entire body to the post, she skillfully adds one last strap around Sasha’s neck, to keep her securely held – both in body and mind. To check her work, Elise uses a zapping taser toy to create fear in Sasha. Ultimately, Elise wants Sasha to trust her, but the process of getting there is going to be fun for Elise. 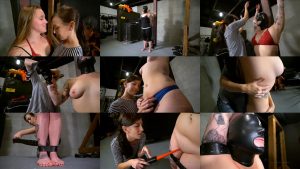