I am a sadistic human trafficker who trolls the internet and social media for potential prey. I’ve connected with a nave young woman Lexi Lane who is curious about bondage and now I am about to reel her in. I’ve arranged a rendezvous at your home and she arrives with a hot and nave friend Juniper Berry. I start out by playing along with the idea of educating them on bondage so I show them a selection of ropes and gags.

Then I have them undress each other and I bind their wrists behind them. I tell them to kiss each other on lips and breasts and they do it giggling still not taking things seriously. I put a ball gag on Lexi and a panel gag on Juniper. I finish tying them up tightly“ one crossed wrists, one elbows together “ plus wrist to waist ties, chest ropes, knees and ankles. I leave them on the floor and tell them that you are off to find a buyer for them as sex slaves. After I go they crawl to each other and try to untie themselves and finally succeed in freeing each other.

The girls put on their pannties and start getting their clothes back on then run to the door where I catch them as they are attempting to flee. I force them to strip and stuff their panties into ech other’s mouth. I toss over a roll of microfoam tapeand make them wrap-gag each other. I proceed to put them into very stringent hogties with lots of rope and pussy splitting crotch ropes added. I leave them struggling helplessly to finish finding the buyer.

I finally return and tell them that I have a buyer for them. They whine and struggle with more desperation. My buyer Jim Hunter then appears and says “you are still short one slave from what you promised–you will have to do in a pinch.” He makes me strip to my panties and tightly hogties you alongside your victims. He then leaves the three of us to struggle while he gets help to transport all of you …. 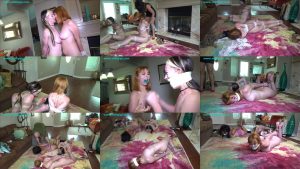