Nyxon explains the situation to GiGi and after some back and forth, Nyxon is following GiGi into the house. Nyxon sits on the couch, and begins going over her notes.

GiGi goes to the kitchen to get Nyxon a drink, and begins to talk about “making the problem go away”, as she hands it to her. Nyxon tells her that that’s just not possible, and takes a few sips. She starts to feel a little woozy, and hands GiGi the glass.

Her eyes flutter, and the next thing she knows, GiGi is slamming her elbows together and tying rope around them. She sits Nyxon upright, then wraps green vet wrap around her head, giving her a nice tape cleave gag. Nyxon kicks and tries to get away, but GiGi wrangles her into a hogtie with a nice, tight crotch rope. 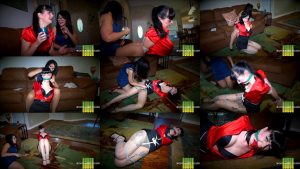