Slyy is relaxing around the house, when a burglar (Nyxon) comes up behind her and covers her mouth with her hand. Slyyy and Nyxon wrestle a moment, then Nyxon drags her off camera. When Slyyy opens her eyes, she’s taped tightly to a chair, stripped to her bra, blindfolded and gagged with a large cloth stuffed in her mouth and sealed with several strips of tape.

She attempts to make some noise, and Nyxon comes in and removes the gag and blindfold, then questions her about her valuables. Slyyy resists, and Nyxon produces a large number of socks to torture her with, by stuffing them into her cheeks. Nyxon takes her time with the mouth packing and goes just beyond the point where Slyyy begins to choke. She finishes off the gag with a white satin OTM gag.

Nyxon lets Slyyy struggle for a bit, then removes the gag. Slyyy tells her that she’s willing to talk. The scene cuts to Slyyy topless on the bed and hogtied. Nyxon comes in and removes Slyyy’s socks, and Slyyy resists, saying that she did everything that Nyxon wanted. Nyxon tells Slyyy that she’s going to have to keep her out of the way more permanently, then stuffs more socks into Slyyy’s mouth until her cheeks are bulging.

Nyxon then wraps clear tape around Slyyy’s head to seal in the socks. Slyyy struggles in the hogtie for a bit, but uses up a lot of energy and decides to rest. Nyxon removes the gag and debates what to so with Slyyy. 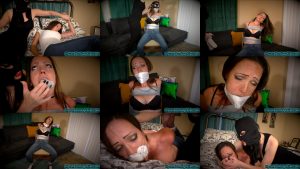