Now Star has Chrissy tightly bound on the bed and plans to have her way with her helpless lover. Chrissy is wearing a leather lingerie set complete with thigh high stockings and stiletto heels as well as a leather slave collar.

Her wrists and ankles have been strapped into leather cuffs and she is tied spread eagle face down on the silky satin sheets. Star enters with a flogger in hand. She proceeds to blindfold Chrissy so she can’t see what’s going to happen to her next. Then she straps a ball gag tightly into Chrissy’s mouth.

Star begins to tease Chrissy with her fingertips running along her body but the sensations quickly change when Star starts whipping her with the flogger. Chrissy squirms and moans as the flogging intensifies.

Then Star switches to a studded leather paddle and gives Chrissy 10 hard swats getting Chrissy used to what it’s like to take punishment.

This paddle is much more severe than the flogger and it’s obvious in Chrissy’s reaction when it first lands on her soft flesh. She begins to drool from her gagged mouth as she counts each stroke as instructed. 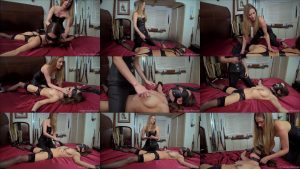