This is a scenario that is different than anything Sahrye and I have ever done before. It involves one using their imagination. The scenario is something along the lines of the fairy tale, Pandora’s Box. Where the girl is told not to open it, but her curiosity gets the better of her. He is going away for the weekend and needs someone to house sit for hm. He hires a girl named Sahrye. After showing her around the house, the man tells Sahrye that there is one last important thing she needs to know. He points to a box and warns her to not open it. He explains that very bad things can happen. Sometime later, Sahrye is relaxing when she starts to wonder, “what is so bad about opening the box”. She gets very curious and cannot stop thinking about it. So she gets near it and starts to investigate a little. “Maybe, I can just take a peek without opening it.” she says to herself as she slowly lifts the lid. Then when she looks inside, she finds the box empty and opens it completely. “Oh my gosh, someone must have stole what was inside” she says out loud and decides to call the man to let him know. Sahrye reaches for her cell phone when all of a sudden, it feels like someone is pulling her left arm behind her and pinning it against her back. But who? There is no one else in the room. Then with her fighting it, her other arm is pulled behind her and all of sudden, she notices her hands are bound with rope. When she tries to stand, her ankles are pulled together and held in place. Then out of no where she finds her legs bound with rope. Sahrye is now very scared because there is no explanation as to what is going on. She works her way to her cell phone so she can call the man and let him know something bad is happening. But all she gets is his voice mail, so she starts to leave him a message… 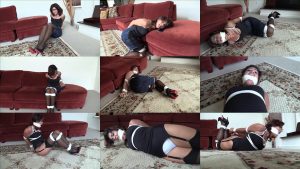