Ivory Soles is growing impatient waiting for her Uber driver, so she decides to send the driver a few messages. She tells the driver that if she doesn’t get to her party on time, that not only is she not going to leave a tip, but she’s going to leave the driver a one star rating. Some time passes, and Ivory hears a knock at her door.

Completely exasperated at this point, Ivory gets up and is surprised to see her Uber driver standing there. The driver, Nyxon, pushes her way into Ivory’s living room and makes herself at home on her couch. Incredulous, Ivory tells the driver to get out of her house and back in her car, but Nyxon has a different idea of how Ivory’s evening is going to go.

She places her hand over Ivory’s mouth, and Ivory kicks and struggles trying to get away. After a few minutes, Ivory goes limp and Nyxon heads out to her car to get a few things. When Ivory comes to, she finds that she’s been stripped down to her lingerie and tied very tightly with rope.

She demands to be untied, but Nyxon pretty much just laughs in her face. She tells Ivory that she doesn’t appreciate her princess attitude, or her nasty messages that she sent through the Uber app… 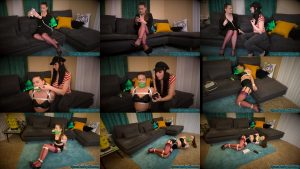