Dakkota is a rich woman and preparing for a big summer boat party during covid. She also hosted a party in her mansion with well over 50 people, which means she needs to be arrested. The cop arrives to a pissed off Dakkota that tells him who she is and how important she is but he doesn’t care. He cuffs her and takes her to jail. She is being unruly in the cell so he hogcuffs her. He calls his pal up to tell her there is a rich bitch in jail and that he should go over to her home and rob it. Shortly after the mayor calls and asks for Dakkota’s release. He complies and Dakkota heads home to get ready for her yachting adventure. She changes from her blue ensemble to a white bikini. Sadly she is greeted by the burglar who is indeed prepared for Dakkota even thought she was expecting her to be gone. Dakkota is all tied up with a ballgag into a ball. Then she is put into a hogtie, mouth stuffed with a big satin scarf and head wrapped with an entire roll of vetwrap. The burglar reminds her to be safe during these times and puts a mask over her face just to humiliate her a bit more. 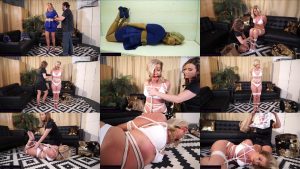