Sahrye and Goldie are secret lovers. Today while both of their husbands are away, Sahrye comes over and tells Goldie she wants to play something new and kinky with her.

So when Sahrye brings out rope and starts to tie Goldie up, she is very excited. Things get really hot when Sahrye pulls Goldie’s top down to expose her huge tits. Sahrye then tells her that she wants Goldie to get very loud for the next part.

So she stuffs and tapes a gag in her mouth. Goldie can hardly wait for the “Next” and she is not at all disappointed with Sahrye ties a crotch rope between her legs. Sometime later, Goldie finds herself moaning very loud and Sahrye uses the crotch rope to make Goldie have the first of many orgasms. 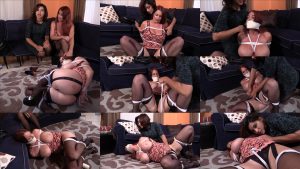