Warning slightly tipsy Babe Supremes on display here. Those of a nervous disposition or who are intimidated by powerful ladies, ah, go and make the coffee or something!Being the well-nourished (as the kiddiewinks these days like to say) of some high flying powerbrokers, stunningly gorgeous Paige and Mikki are used to being kept in the high degree of style and, dare we say, panache, to which theyve become accustomed. Pampered, bitchy, beautiful, tartlets to “ a – TEE Dammit all if they don’t fit like a glove the time honoured token stereotype, and then some. As they sit around, bragging to one another about how much they’ve got coming in, a familiar Borderland Bound Face shows up to convince them it would be in their best interests if they both canned the cheap (or expensive, if you’re following the cerebral thread here) talk and get wit the PROGRAM. Said program being: They’re both being held for a hefty ransom! At first, the brazen bimbos don’t believe him and think it’s all some kind of silly joke, but are soon convinced otherwise and after protesting and being generally unhelpful to this arch-cri ause, are both physically overpowered and tied up but goooood! Mega tight cleave gags are bound about their feisty mouths and the delightful ensuant gagged up cacophony is well worth listening to. They can’t say a WORD. Spankin. Now then, as the pair are left to struggle and, more aptly here, wriggle, like highly attractive worms on the carpet, our tough guy hostage taker heads off to put the call in to the big money dudes supporting these two little sluts. When they are sure he’s gone, the pair communicate as best they can through mouths chock full o cloth, later squeezing some sexy heels off and… 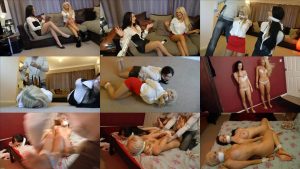