A knock at the door was how it all began… Actually, several of them, becoming an impatient flurry. The freaky dude living there wanted them, NEEDED them to just go away, to let him carry on about his criminal dealings. But they just kept knocking“ and they saw him through the glass! So, bravely, he answers it and immediately wishes he hadn’t.

It’s the goddamned Feds and as incredibly busty and scintillating as they both are they’re also hot in pursuit of a little ol smuggling ring this fellow knows more than a little about. Barging past him, sultry Eastern Euro, Agent Roma, that most stunning of babes, is instructed by the equally ravishing Agent Lee to keep an eye on this guy while she has a look around the place. At first, the blustering occupant attempts small talk, then BIG talk.

None of it works on the granite faced utra-beauty and so he proceeds directly to Plan B without passing Go. Grabbing her unawares (watch how he pulls THAT one off) he hand gags her, hard, and the pair struggle for what seems an eternity; Roma desperately trying to alert her fellow agent. In the end, he takes her down with a neck chop and it’s Good Night Vienna. Next up, Agent Lee is similarly accosted and dragged away to be tightly tape-trussed to a chair along with busty Agent Roma.

The pair are furious and pour scorn on the little man, warning him he has gone too far (no shiz) and he’s in deep, deep trouble when their colleagues show up to rescue them! He wants to hear none of it and stuffs their mouths up as they loudly protest and then savagely tape wrap gags both into muffled, smoulderingly sexy silence. Excellent onscreen stuffing and gagging action again here, if we dare say Then the pair of struggling and straining chairbound beauties have their taped up legs further restricted (like they need it) by being bound firmly to chair legs… 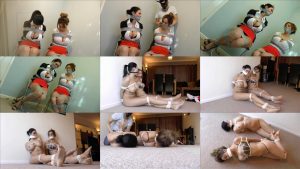