Tracy confesses one of her fantasies it to be tied and groped from behind. How could we refuse! Tracy blindfolds herself and again is tied spread eagle, but this time she has her back to the camera. A stranger enters with ideas far more than a simple grope as he unzips her dress and caresses her naked back.

Tracey Lain looks magnificent dressed in a smoky semi-translucent latex dress, fishnet stockings, garter belt and heels and even better when she is tied spread eagle. Before Tracey knows what’s happening her back is being flogged so her skin turns a nice pink color then her punishment stops leaving Tracey wondering what else is in store for her. She didn’t have to wait long as a pink butt plug is forced into her arse followed by the placement of a large vibrator on her clit until her first noisy orgasm is achieved. Tracey now thinks she will be released but that would be too easy. 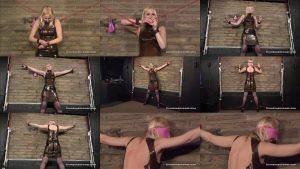