A magic wand is well strapped in place against her pussy, under the open bottomed vintage girdle, her big breasts exposed over the lacey, zippered top of her shape wear, every curve caught in coils of cotton rope, highlighting her hourglass figure. Sandra stands tethered at the end of the bed – a four poster – pole tied, keeping the MILF’s attention captured ? 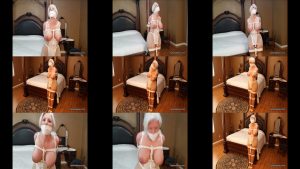