As this steampunk-inspired adventure begins, the beautiful spy Mata Hana (Hannah Perez) is taken captive by the villainous Mr. Bike. She’s ballgagged and bound hand and foot in her costume (all shown on-screen). Left alone, the gorgeous damsel hops around on stage, and she breaks a glass to try to cut herself loose. But she’s caught as she makes her failed escape attempt. What will the scoundrel do to her next?

Then Mata Hana” is hogtied, cleavegagged and her breasts are exposed by the scoundrel Mr. Bike. She struggles to get loose and manages to free her hands, but she’s caught, her wrists are re-tied and her elbows are bound together. The villain also adds a toe-tie to her hogtie. Then the helpless spy is placed into a trunk to be spirited away to Mr. Bike’s secret lair. 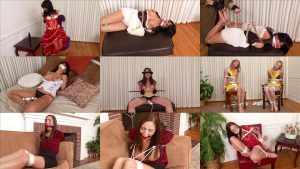