Equipment bag and empty mug in hand he knocked on her door to return the receptacle… The broad shouldered workman had brightened her day, as she set about completing her chores around the house; this handsome hulk handling his tools had caught her eye out of the kitchen window. As he packed up his van she wished he had a reason to stay a little longer…

His knock at the door startled her out of her reverie. Reaching out to receive her returned coffee cup, his big hand encircled her wrist, spinning her in his grip, pinning her arm behind her and between their tightly pressed bodies… His palm sealing any squeal that may escape her lips, securely covering her mouth… 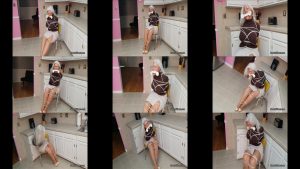