Babysitter Karly Salinas is playing on her phone, when suddenly a stranger (POV) enters the room. Startled, Karly drops her phone and asks the man what he wants. He tells her that he’s there to rob the place, but didn’t expect such a cute girl to be at home.

Karly opens her mouth wide, puts the ball between her teeth, and pulls the strap tight. The camera fades, and when we come back, Karly is tied tightly on the couch with her arms behind her back. The man tells her that he’s going to nose around for valuables, and walks away. Karly moans through her gag and struggles furiously trying to get out of the rope. 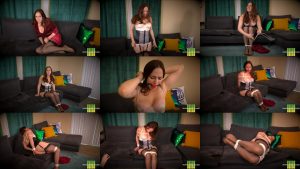