Sexy Samantha is all dressed up and ready to go to her favorite comic convention. She chose to go as “Cortana” from her favorite video game “Halo”. She comes downstairs with a huge smile on her face and sees her boyfriend there holding a bag of rope. “What’s that for?” she asks innocently.

“You remember that bet you lost yesterday? The one where you said you wouldn’t go to the convention if you lost? The one you were SOOOOO sure about?..”

“Well, yeah, but I thought we were just joking around. I got all dressed up and I’m ready to go!” He pulls the rope from the bag. “The only place you’re going is to sit up here on the table.”

“What?! You’re kidding! Right?..” He looks at her sternly and she bows her head. “Fine!” He ties her very tightly to the table in a sitting position with arms and legs spread wide. He doesn’t forget the extra tight crotch rope and panel gag either. Once she is all tied up in place he pulls out his video camera and tripod. He sets it in place and turns to her

“Well now, I have a convention to go to. I didn’t want to miss any of your struggling tho, so I set up a camera to catch it all while I’m gone! Also, I might post it to your fandom page to see what your friends think of it!”

She struggles and moans in protest. “I’ll seee you later babes..” he jokes as he pulls the door closed behind him. 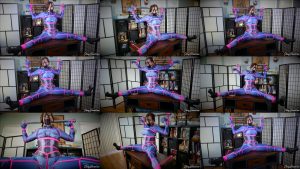