The Crimson Avenger had no idea what she was in for when she materialized into the lair of her arch nemesis, Captain Mesmer. Her proud demeanor and confidence are no match for his mind melter program, administered first with a blast from his obedience ray. Unable to refuse his commands, the superheroine finds herself stripping completely nude before the evil genius, removing her costume and boots to display every bit of her super physique! Her power to speak removed by the mad doctor, she is soon kneeling in helpless frustration as the doctor prepares the next phase of her ordeal: The Climax Conditioner! Bound to the device, she has just enough slack to laboriously lift herself off the device, but her growing fatigue and the effects of the vibrator make staying off it impossible, ensuring the buff blonde crime fighter has one mind bending orgasm after another, each more powerful than the last! Can she prevent her mind from being melted? 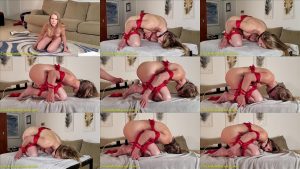