In the next part of this fantasy, bride Savannah Six has finally been told she’s really been nabbed by a masked villain. While Savannah’s captor waits for the groom-to-be to respond to his ransom demands, he keeps the beautiful bride comfortable while she’s under wraps. Savannah is thoroughly bound lying down on the bed with her arms secured to her sides. She begs the cruel villain to let her go and not ruin her wedding day, but her pleas are answered with a tightly strapped ballgag. The bound and gagged bride struggles against the web of ropes but the restraints don’t allow her much movement. Then later the masked baddie bares Savannah’s luscious breasts for his own wicked amusement. But will the groom pay up so the wedding will go on without any more hitches? 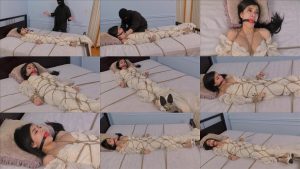