Stunning Natasha Marley and Callista wriggling tightly bound and gagged together, for a looooong time? We’ll have some of that. It’s been a while since the demented Ignatius Hillier went off the reservation, and yet here he is again now, having stashed a surprise upstairs in one of his loft suites. He is preparing to head into town to purchase some things with which to construct dinner later for his. Surprise when the front door is briskly knocked upon.

Opening it, the arch perv is overwhelmed by the beautiful vision of backpacking rambler Ms Marley. Inviting her in, rather quickly, he shows her to a room near the top. The stunning babe is thrilled to have found such a nice hostel. For that is what she thinks this is, and later, when Ignatius pounces, it may as well be that horrific. Surprising the confessed keen birdwatcher as she slumbers, he overpowers a struggling Natasha and leaves her bound and gagged in her room. After much sexy, cleave gagged bed struggling, the beautiful backpacker manages to hop off, where ultimately she finds the surprise upstairs on the third floor. It’s Callista! Captured earlier and tightly hogtied and gagged in a corner of the room! That asswipe sure has been busy!

Needless to say the energised hotties try repeatedly to free one another, with predictably hot n steamy results. When Ignatius Hillier later discovers their attempts, he furiously binds Tasha into a tight hogtie to and leave the wriggling babes to gag chat and thrill us all down to the bone. After a while, he returns and viciously tape gags a heavily straining Tasha, assaulting both with spanks and rib tickles. The squirming, utterly trussed ladies bump and grind their way to tape gagged glory. 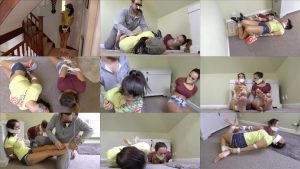