Terra is babysitting the neighbor’s boys, and upon introducing herself, she asks them what game would they like to play. They (POV) tell her that it’s a surprise game, and they hand her a blindfold to put on. Terra complies, and then the boys tell her to stand up, turn around, and put her hands behind her back.
After the camera fades and comes back in, Terra is tied hands behind her back, elbows, above and below her chest, crotch rope, knees and ankles. Talking to herself, she admits they did a good job at tying her up. She is surprised at the crotch rope, and wonders if they know how much she likes it.
The boys (POV) return, and Terra is told to open her mouth. She’s a white piece of cloth is stuffed in her mouth, and an over the mouth gag is tied around her head (all done off screen). Terra struggles playfully for a while until the boys come back to check on her. The untie her upper body, and Terra removes the gag herself. She tells them that this was a fun game, and wants to play it again. 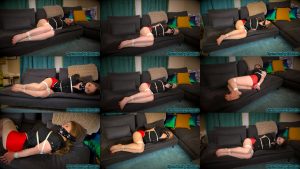