The video is a parody medical training video/PSA type video from the 90s. The video opens with Rachelle sitting on a chair introducing herself as ‘Nurse Rachelle’ and introducing us to the phenomenon known as kink deficiency where many many people struggle to get sexually excited and the terrible impact that’s having on the general happiness of the country.
Nurse Rachelle works with the greatest minds in the research field and she’s going to show us the different ways to treat the disease. Rachelle opens us some of the initial ways of relieving kink deficiency, the first leads on costumes and role playing and the importance they can play in causing excitement with Rachelle detailing a story of how she fixed one patient’s kink deficiency by conducting the patient’s sessions in different costumes.
Rachelle moves onto the second possible treatment of kink deficiency: feet. One of the most common fetishes are foot fetishes and Rachelle takes off her high heels to reveal her feet. Rachelle informs the viewer that if the most common forms of treatment don’t work, there’s a need to move onto the more extreme forms of treat such as bondage. She tells us how handcuffs are typically used to cause arousal, here she dangles a pair of handcuffs and sometimes that doesn’t entirely work and brings out a steel yoke fiddle where she describes how its restraints the neck and wrists.
Of course we see Rachelle demonstrating each of these techniques for the viewer, showing herself in different costumes, offering a foot fetish show and showing herself first handcuffed, and then bound in the fiddle and her ankles cuffed together, showing herself off bound with a closeup from top to bottom and back.
Rachelle playfully informs us of the benefits of bondage and how much patients show recovery when bondage play is started as she struggles to show she can’t get out. To complement this form of treatment, engaging in general submissive behaviour such as referring someone as Master/Mistress/Sir etc as many people assert dominance to overcome the deficiency such as walking on toes and kneeling on the floor which Rachelle demonstrates, however for some patients the next step of treatment for hasher forms of restraints. 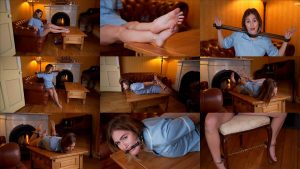