We shot this custom series of Tillie as a new slavegirl a year or so ago and while we were shooting our friend Michael Stamp came along to experiment with shooting video. Although he kindly edited it into something like a music video, he then moved to Spain (huh! The nerve of some people.We never got around to properly handing the project off, and in the end I decided that since the customer who had ordered the photos liked behind-the-scenes stuff, it was probably nicer for him for me to edit the footage into a behind-the-scenes feature rather than go with the contortions of editing video shot while we were shooting stills into a traditional music video. (There’s a reason we shoot video OR stills of a given set, not both). So I hope you enjoy this look behind the scenes at a day of shooting with Tillie. 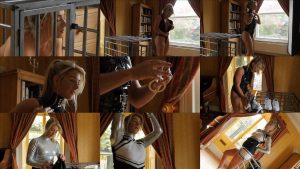