As Nikole Nash’s plight continues, her senator father has not complied with the villain’s demands. Stripped down to a pair of thong panties and open-toed heels, Nikole is roped into a standing position to beg for her father’s cooperation again. Once the second video is completed, the sweet damsel is cleavegagged with a bandana and left to struggle while the dark villain tends to his tasks. Nikole tries her best to wriggle out of her restraints, but it’s apparent she’s stuck there for as long as he wants. Later Nikole’s gag is changed for a microfoam tapegag, and her captor returns to let her know that the senator is not going to yield to their demands. And so now he’s decided to auction Nikole to the highest bidder! 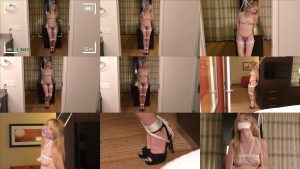