Sexy Ashley Wolf takes in a casual run in her neighborhood, not realizing the eyes on her and her shiny spandex leggings.. She gets back to her house and walks inside where she is grabbed from behind by a masked man and wrestled down to the ground. Her arms are pinned behind her and her hands are tied. He pulls some dirty panties out of her hamper and stuffs her mouth with them before taping around her head to keep them in place. He ties a rope around her neck and drags her up and over to an anchor point in the ceiling and ties it off.

She frantically tries to get away and kick at him. He grabs more rope and ties a tight crotchrope on her and secures it to her wrists to hold them down. He spins her around and ropes up her elbows behind her. Now pretty much totally helpless, she again kicks out at him and tries to get her arms loose. He tells her he is going upstairs to prepare a room for her and leaves her there wondering what that means. She’s panic stricken and trying everything she can to get free. After a few moments he returns and unties her neck from the ceiling, keeping at attached as a leash. He drags her into the room where he has more rope waiting.. Don’t miss part 2 coming soon! 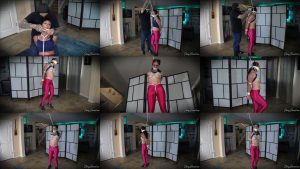