He’s finished his work for the day, but that doesn’t mean he’ll be leaving the shop – now he can set to more pleasurable business! Laid out and waiting for him on top of the work bench – secured in a steel device that holds her pantyhosed toes pointing over her curvaceous form, bare breasts pressing into the rough wood ?“

Sandra waits for his attentions. She’s been quiet in her position, the occasional moan escaping through the massive mouth-filling ball gag harnessed over her silver hair. A jingle of metal and chains from the cuffs at her wrists, as she flexes her muscles in minute struggles, such severe restriction in this harsh position, the ropes cutting into each bare foot and ankle against cold, hard steel, the prick of a splinter in her soft flesh as she wiggles her hips, arching her back for a moment of respite.

All the agony to be rewarded in just a moment, as her Master comes towards her. Watching her predicament all day he decided to test her endurance in one more way, with a cruel twist to his plans.

She starts struggle and shudder as the vibrating device begins to take massive effect. Copious amounts of drool flow from around the huge ball in her mouth as her head pulls back involuntarily, she’s wracked with orgasm after orgasm, each one wrenching pleasure through her pained, restricted body. 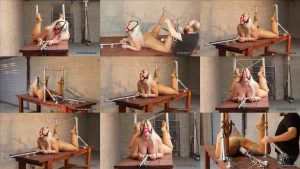