Glamorous lady wrestler Sybil Starr has beaten down countless men over her career, but today she’s met her match! The only wrestling she’s going to be doing is against the ropes that fuse her to the chair, prisoner of a man whose son maxed out the credit cards. Since her captor paid for everything, he feels it’s only fair he gets a little taste of what the powerful female fighter has to offer: Turns out, not much, but to be fair, it’s hard to show off your best moves when your mouth is full of rubber and you’re exposed and immobilized!

Sybil gag talks up a storm, drool flying as she curses out her captor and tries to summon help. Unfortunately, he’s found her phone and her list of client contacts, and poor Sybil can only struggle in helpless fury as he calls her clients to inform them that Sybil is leaving the wrestling biz to become a full time submissive damsel in distress model!

Raging in garbled anger, she thrashes about but the chair holds her fast. About the only thing she can do is shake and bounce her huge all natural double D tits, thoughtfully pulled out of her wrestling costume for her captor’s enjoyment! Finally, drool pouring down her chin and dribbling on her huge boobs, the formerly feisty queen of the mats breaks down sobbing, knowing she’s trapped until this lunatic feels he has had his money’s worth! 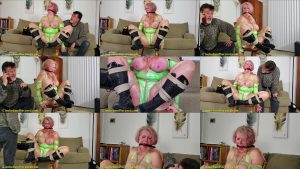