This week we’ve got CeCe Stone on SocietySM and she’s being handled by Phoenix. She’s been here before, but today will mark a new awakening for her as Phoenix will slowly mold her into a different type of disciple. She takes direction well as he begins to set about running her through her paces. And once he has her in the spreader bar, CeCe gets her first taste of pain as he wails on her backside in dual floggered fashion leaving her ass red and raw…CeCe has a bit of an issue staying still much to her new Master’s disappointment, so he binds her ass up to the cube and hammers her with riding crops. Already raw, CeCe has a hard time controlling herself as he continues working on her flesh, but there’s a little reward in the cards when he stuffs a dildo in her pussy and vibes her off to a mind-bending orgasm. Sadistically, Phoenix then proceeds to squeeze a bit more from her and CeCe obliges in convulsive fashion…Next, she whimpers on the stretcher as TENS pads are stuck in place. Then, the blinding white heat of hot wax rains down upon her flesh. It doesn’t get any easier for CeCe however as she is pinned and probed, then bent and clamped in a ferocious finale’. 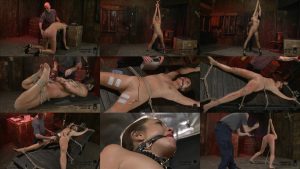