Raven Eve, dressed in a cute spring dress, was relaxing on her couch when she heard a loud noise. An acquaintance from her past suddenly showed up in front of her. He pulled her off the couch and started to unzip her dress as she struggled in his grasp. Even though she was much smaller than the man, who was forcibly undressing her, she fought against him as hard as she could but to no avail. Soon he had her undressed, her arms bound tightly behind her, and her mouth stuffed and taped closed. He pushed her to the ground where he tied her into a hogtie while holding her down on the ground. Once the man was done with her bondage, he left her there to struggle as much as she could; grunting behind her tight tape gag. 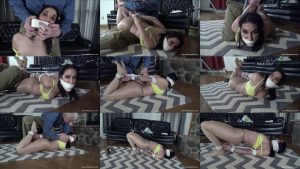